“If one isn’t an origami folder, it’s difficult to explain the process of conception through to the finished model. The creation process is similar to a scientific method. When designing a person, one begins with the assumption that the four corners of the paper will represent each hand and foot. From that general assumption, a “crease pattern” is developed that blueprints all the folds required for the model. These crease patterns may be modified while the model takes shape. Some of my first creations, like the hedgehog, took 5-6 years to finally develop. Now, years later, the process is a little easier.

‘Origami has within it all the possibilities we associate with creative art,’ Yoshizawa-sensei once said.

I try to respect the traditional rules of origami, using only one piece of paper and never cutting. The important element for me is modeling the paper. Precreasing and collapsing a geometrical base is not a pleasurable for me. It is merely a required step to arrive at my real work: sculpting.

I have a great respect for ‘pure origami’, with flat surfaces and nice geometrical conception, but as you can feel looking at my own models, I am much more interested into models ‘looking alive’, which means for me volume, curved creases and much sculpting. 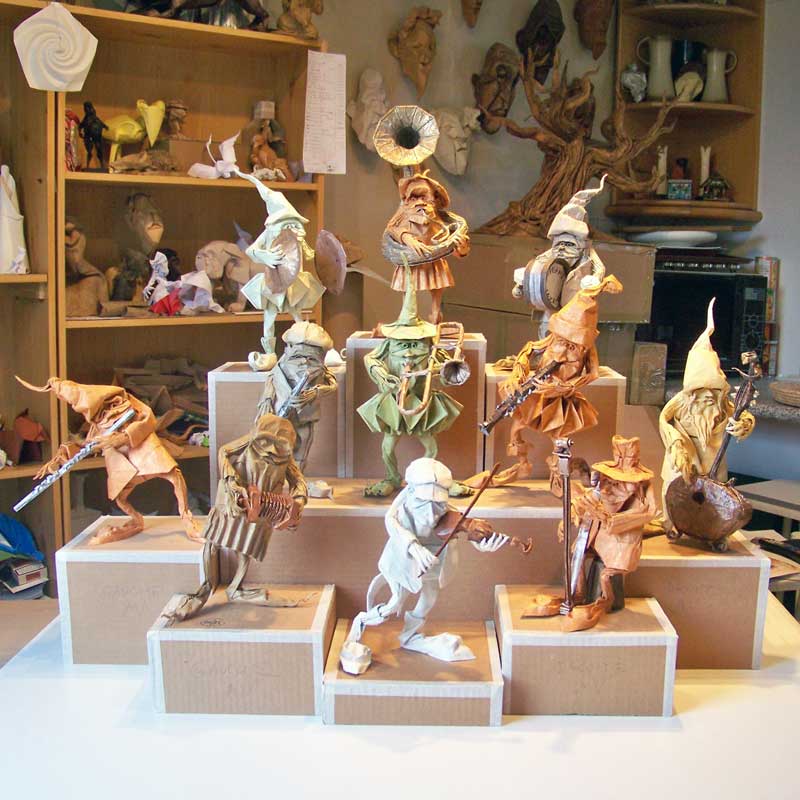 “Faeries enjoy music and so do I. Because origami can be so complex and technical, perhaps it should have been possible to create every musician and his instrument from a single piece of paper. The thickness of the paper can make that too difficult. I elected to make each musician 30-cm high and his instrument from single sheets of paper so that I could focus on the attitudes and elegance of each piece. In this way, the well-conceived model can efficiently use the whole surface of the square with no useless parts.

I have always been interested in conceptualizing and realizing models containing different types of surfaces and shapes that can play with the light and give the illusion of different colors. Like a good piece of jazz, every model I create is unique and one-of-a-kind. 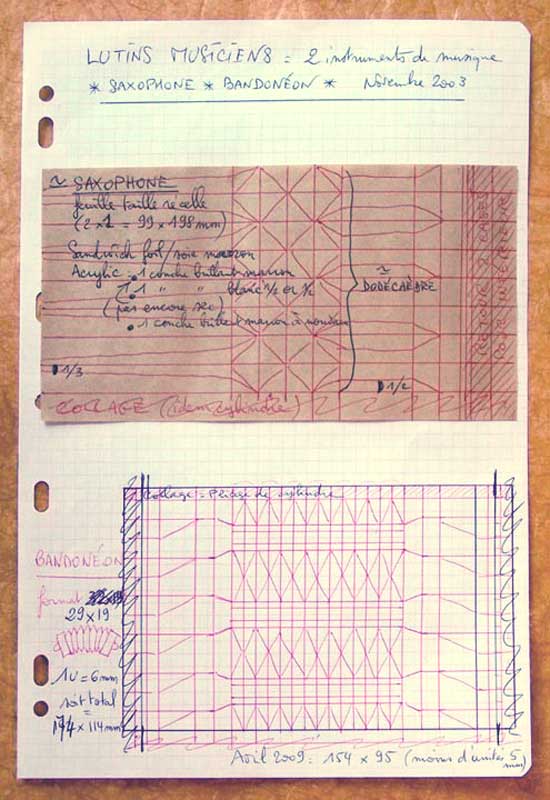 Example of 2 crease patterns for instruments… 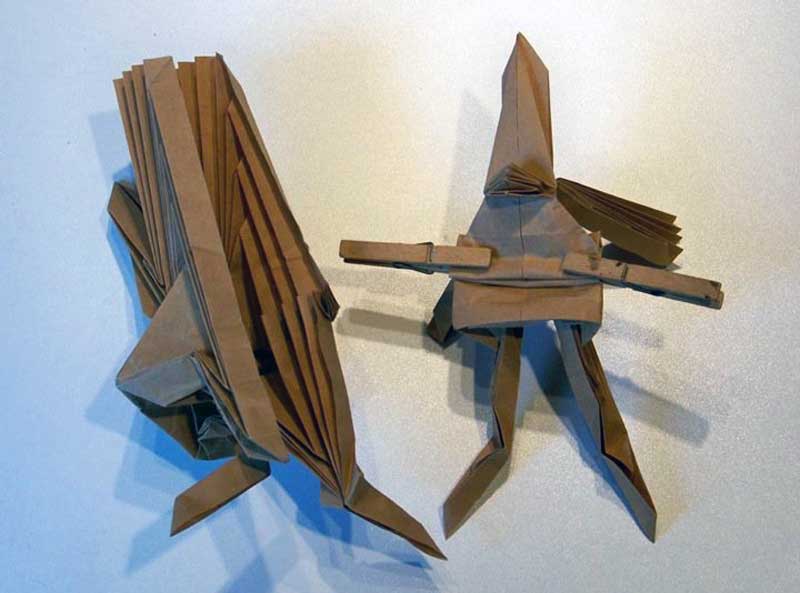 In the first BOJB, I used 4 different CPs to produce the different costumes. But I didn’t draw ALL these CPs. Here are two first tries to verify the proportions of the box-pleating grid (Queue-de-Pie’ et ‘Toge’.) 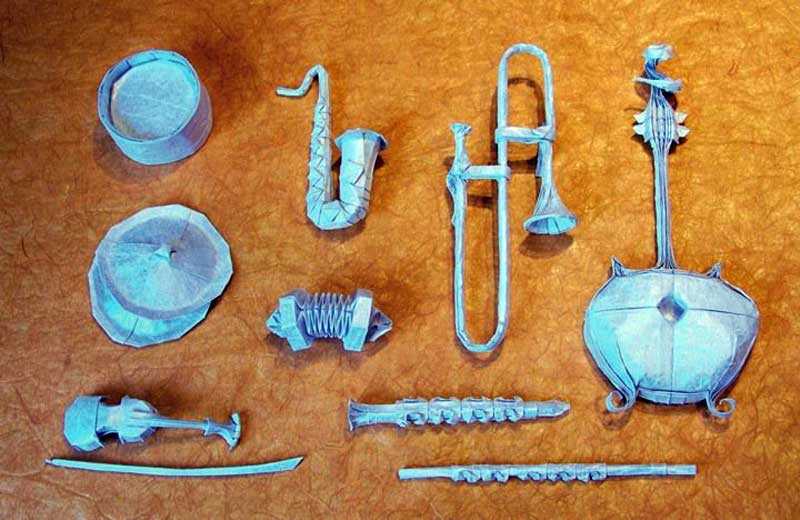 The first attempts at instruments.
The harp and the tuba will be made later,
directly on the characters.. 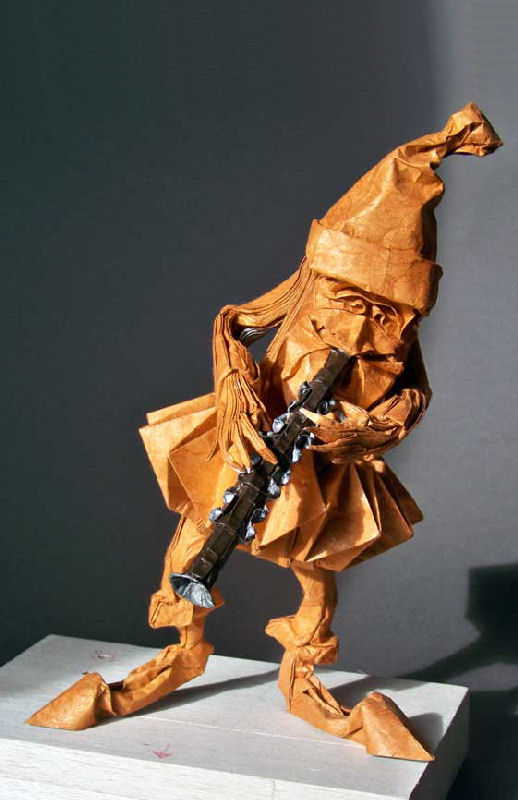 Every paper, square or rectangle, needs to be 70 to 90 cm. In the first BOJB, I used a foil absolutely perfect for me. Alas, 4 years later, it is impossible to find it in France. I needed to go specifically to Belgium! That’s too much trouble. So, I bought about 300€ of material, glued together 8 sheets (washi/alu/tissue), and it worked !!! 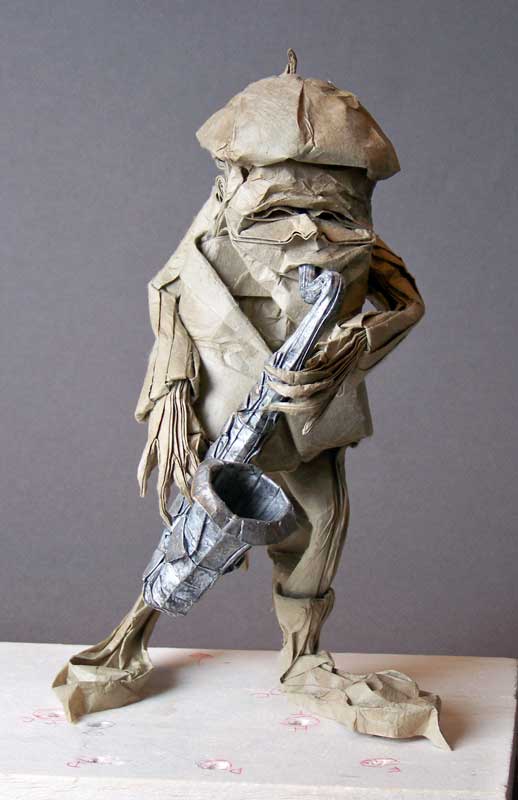 There are 11 collapses with 6 different colors and 4 different costume bases. The hat is always the same, but can be folded and modelled in many different fashions. The basic costume is about 26 x 26 cm. Sometimes I substituted washi with Lokta. 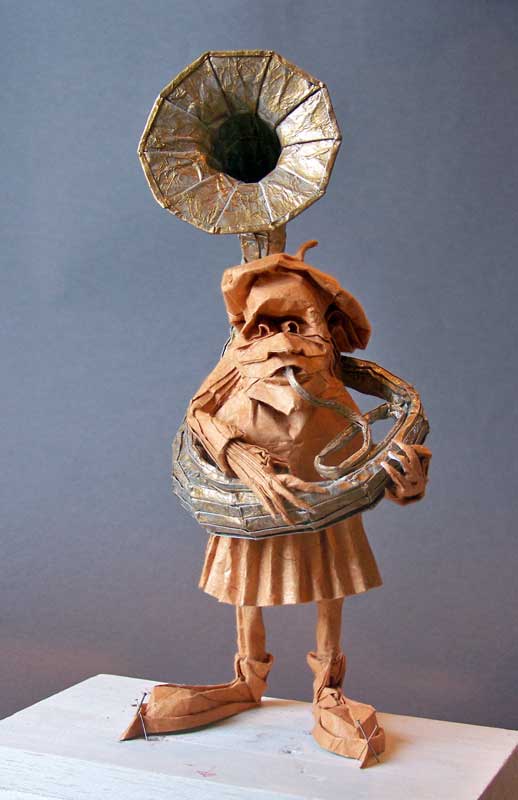 The most difficult instrument to fashion is the tuba or helicon. The Dwarf wears a “beret français” ! (strange, isn’t it ?), and a fourth type of costume. 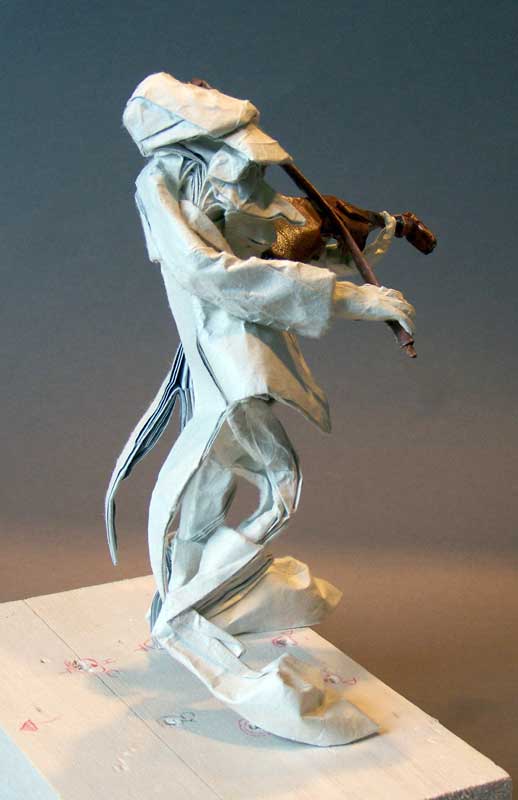 The 8th musician is the violinist with his costume “Queue de pie”.

“Eric’s works left an immediate deep impression on me when I first saw them in New York in the nineties. Back then, I was just starting to design my own models, but seeing Eric’s art (along with Akira Yoshizawa’s and David Brill’s work) really opened my eyes. I understood then that origami can be very sculptural and that a piece of paper can have great soul. It’s the origami style I have adopted for myself.

Later, I got to know Eric better, a very nice person who has a great sense of humor. I also found out that we use similar tools and techniques, even though our ‘styles’ are quite different. Eric Joisel’s creations beautifully combine artistic sensibility and technical prowess. Eric is a sculptor who happens to choose paper as his medium, and he has pushed it to unfathomable lengths.” 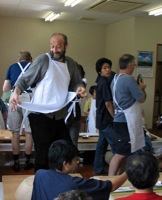