Eric Joisel is considered by his peers to have been among the finest origami masters in the world. This beloved French artist and sculptor created stunningly beautiful and complex sculpted origami paper models. Origami is the Japanese art of forming sculptures out of paper only. And Eric Joisel took this to a whole new level. His pieces are not regular origami models, but completely different interpretations of a very ancient art form.

Most of Eric’s models are three dimensional and lifelike in appearance. Eric could spend more than 100-hours folding a single piece of paper in order to create his amazing pieces of art.

“Origami is very difficult”, he said. “When people ask how long it takes me to make a sculpture I say ’35 years’, because that is how long it’s taken me to get to this level.”

“I have worked in clay, stone and wood before working in paper. I prefer creating human figures more than animals. Before I was able to attempt folding a complete human figure, I practiced making masks and faces for many years. This was more than just production, it was the process of breathing life into the paper and most importantly, partially improvising with every model so that each one was distinctive. This is different than traditional origami where every step is exactly defined so that folders could produce accurate copies. All my models are completely unique.”

Since 1984, Eric showcased his origami art in international exhibitions around the world from the Louvre to Japan and Seattle.

Click the arrow to watch an excerpt of Green Fuse Films Peabody-award winning documentary “Between the Folds”.

ancient Japanese print
The traditional concept of origami is folding paper to create objects using only one piece of paper with no cuts or glue. Although origami art has unlimited possibilities, most models generally begin with a specific type of base (eg., fish, bird, waterbomb base) from which the rest of the model develops. As well, there a variety of folds employed in creating these models, ranging from the simple (valley, mountain) to the more complex (sinks, swivels). Together, the bases and mixture of folds combine to produce models that represent everything imaginable.

Centuries ago, the first origami models were simple and stylized. Today, origami has developed into an art form that produces sophisticated, complex and highly technical models sculpted by professional artists around the world who still work to the adage, “one square, no cut, no glue.” 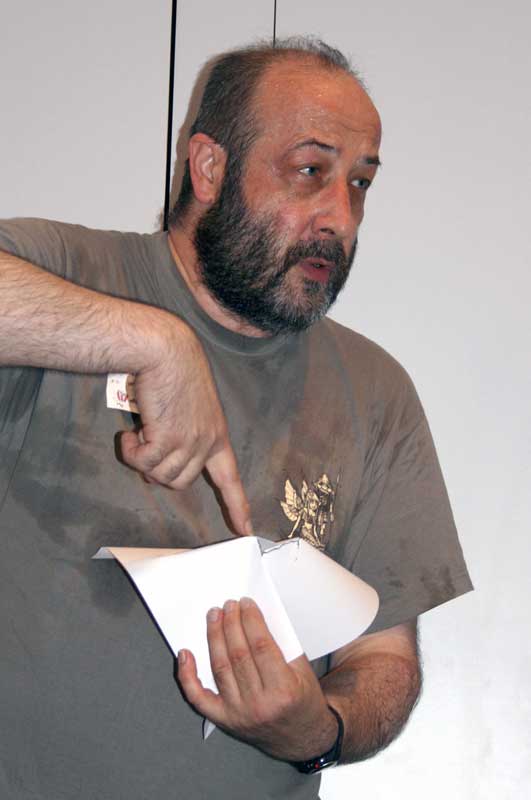 “Eric is French down to his bones. His native Gallic wit makes him a highly entertaining yet self-deprecating teacher. Catch him “off stage” and the clown becomes a introspective, even slightly morose artist. His creative work speaks for itself – he brings a rare artistic sensibility to origami and is unflinchingly honest in his assessment of everything he does. This burning drive towards
perfection results in works of staggering quality that are almost
impossible for mere folders to replicate. I’m proud to know him.”