“The characters from Commedia dell’Arte are extremely attractive in my mind.
Commedia dell’Arte costumes from the 16-17th century
Commedia dell’Arte most nearly means “comedy of art” and it is a professional form of theatre that began in Italy in the mid-16th century, and was characterized by masked “types”, the advent of the actress, and improvised performances based on sketches or scenarios. Compagnie, or companies, were troupes of actors, each of whom had a specific function or role. The costumes from that period (let’s say 16th-17th Century) are magnificent, especially if you are interested in textures, like me. I already create a mythic couple : Arlecchino and Colombina. Both are now in the Origami House, Tokyo.

I found these drawings produced by a 19th Century specialist of Commedia dell’Arte. My crazy and enormous project is to illustrate Dante’s Seven Deadly Sins represented by 7 typical characters from Commedia dell’Arte. This has been a dream of mine for years.” 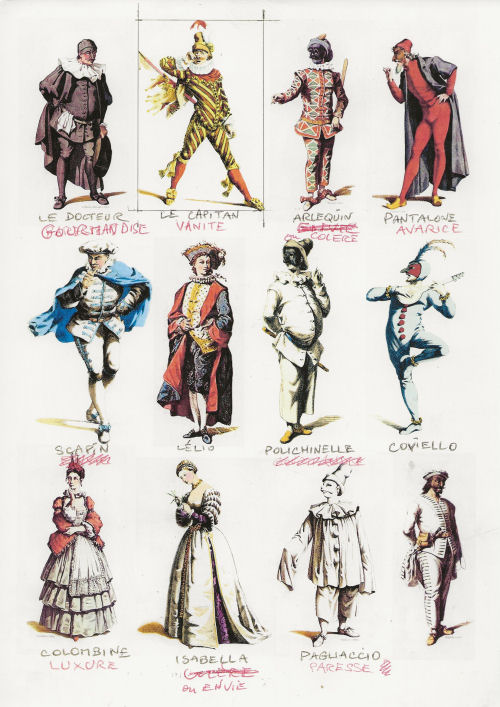 Today, the target is ‘Il Capitan’ (or eventually “Il Matamore”), who represents Vanity or Pride. It suggests a Spanish soldier as Italy was probably occupied by Spain at that time. Most interesting are the typical collar, costume details and long sword.

I decide I will directly fold my paper, 140 cm square MC+WF, without any first try, except these 2 partial, focus and sword connection and costume center. The sword will be in 2 parts (similar to the Balrog), with a perfectly symmetrical CP. When I say MC+WF, in fact I always fold DRY (the simple collapse could be one or 2 whole days). That’s for final shaping that I use water and a hair-dryer.

New target for today: “COLOMBINA”. She is a waitress, a “zanni” in Commedia dell’Arte. She is supposed to “be easy” so I have chosen her to represent Lust. Like “Il Capitan”, I will not practice with a first try; this is a full improvisation with the paper. Improvisation is also typical of the Commedia dell’Arte itself. I am relatively satisfied with the costume and the different textures, including the perforations in the apron. The open cleavage would certainly never have happened in the real Commedia dell’Arte. This is of course to suggest Lust, and it’s a reminder of the different grotesque sculptures I saw in Salzburg, Austria, during the “Masters of Origami” exhibition in 2005.

Colombina’s first collapse: the beginning of the work was long and full of reflection. Colombina needs to be relatively the same size as Il Capitan. That’s make difficult the size of paper, of the box-pleating grid, so that the details of the dress. I changed them several time to obtain the good size, compare to Il Capitan.

The third character, and third Deadly Sin is “Pagliaccio”, representing Laziness. Here the costume is relatively simple to realise, compared to the others, but the personality (Laziness) is really difficult. I suppose the best caricature would probably be someone sleeping on the floor. But I want a more temperate result as the seven characters always stand up on their own base. I like the idea that every sin will be more suggestive than obvious.

As Colombina, Pagliaccio is a ‘zanni’ (a servant), an important role in fact, and the most important in Molière theater (the most famous French theater author). Targets are the mask, the three buttons and the cloth effect. Don’t know if it is evident but he is yawning… that, with the fact that the other hand is hidden by the sleeve, is supposed to suggest laziness.

Again, the biggest problem is to realise the 3 characters with the same proportions.

The fourth character in this series is the Arlecchino. With his strange mask and stick, he is supposed to represent Anger. He is also a lazy servant, but with an important role in fact. Again, I don’t practice with any first try, but fold directly from ‘real’ paper. I only made a suggestive CP (crease pattern) just to evaluate the box-pleating grid and the exact size of the sheet. The perforations to suggest the two colours in the costume are not very good, in fact the final height is 47 cm, width 25 cm. The first Arlecchino I folded had a French hat, from the 18th and 19th Century. Every country had to modify the initial Italian characters.

In this series, I do my best to produce characters very close to the old engraving and hopefully, their native costumes. 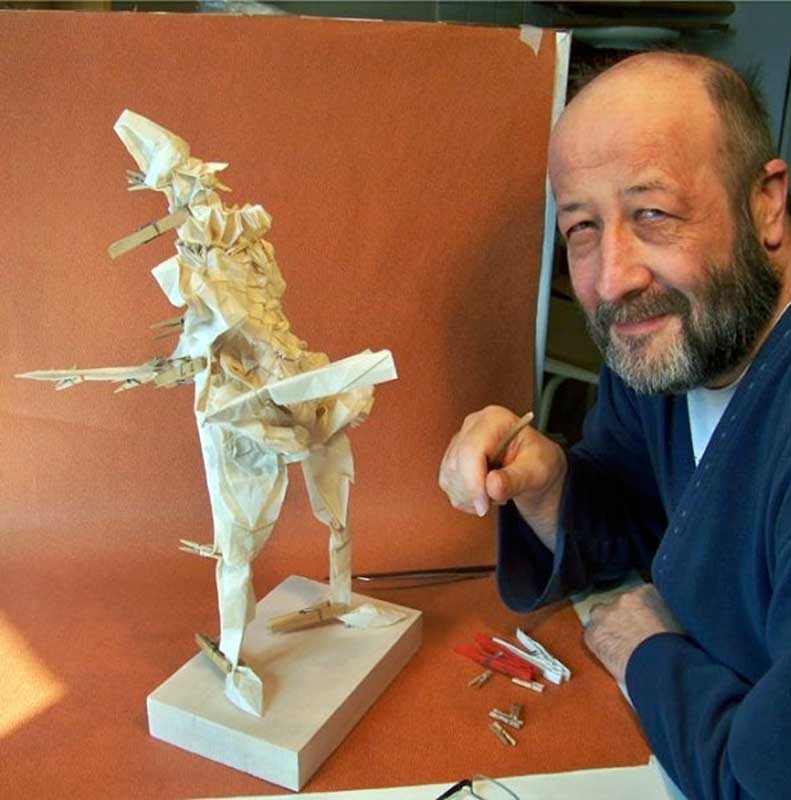 The actual group of four: Il Capitan, Colombina, Pagliaccio and Arlecchino, alias Vanity, lust, laziness and anger. Actual width of the four models is one meter, and the height is more than 50-cm. The three other characters are Il Dottore, Pantalone and Isabella also important roles in Commedia dell’Arte. Only two women but five men are in the group. This is a respectable proportion compared to the reality of the times as male actors were much more numerous than female, and in earlier times, there were only men, some of whom dressed like women.

At the moment, I do not feel that I have enough energy to finish the remaining characters of the Commedia. I may choose to add some other elements, like an angel or a demon, and for Commedia, a tragi-comedy mask). Perhaps after more reflection, I may even change certain characters. I prefer to keep this intention and to take up this project a little later, when health and inspiration permit. 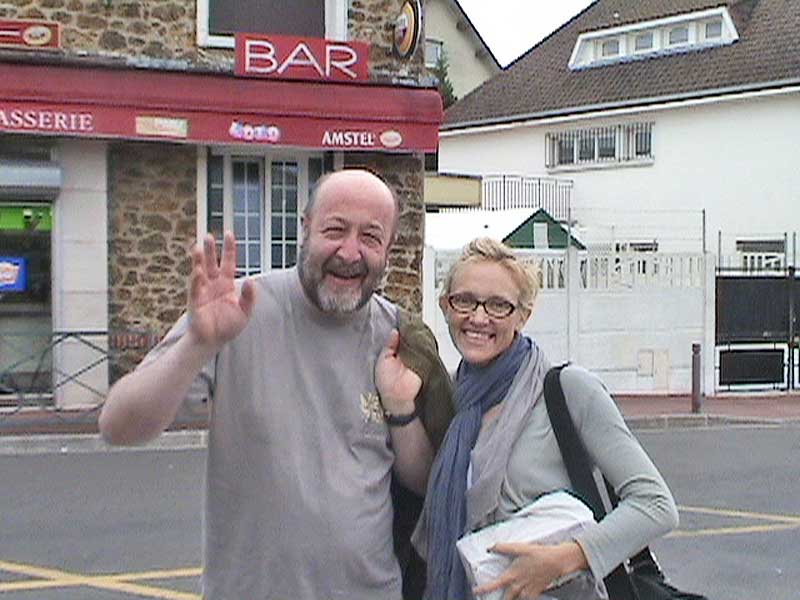 “I think my heart skipped a beat the first time I saw Eric’s work in person. It’s profoundly gorgeous, emotive and alive – often witty and, of course, always technically unfathomable. His process is no less of a feat: meticulous and daring, ambitious and all-consuming. All these qualities have aligned to create a consummate body of work, and one that has Eric’s singular and indelible fingerprint on every piece he creates. And it’s through this rare combination of achievements in his work that Eric has shown me what it is to be a true artist, an example I’ll always hold with the highest regard. I have great love and admiration for him, as both an extraordinary artist and as a wonderful and dear friend.” 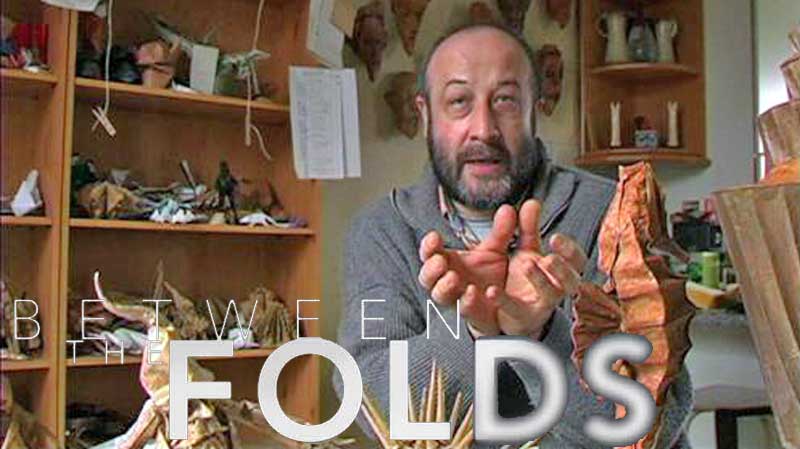