“Let me try to explain the various origami stages that I went through during my career, the actual result is the series of “Barbarians” (which I call like that in reference to the film Conan the Barbarian’ with Arnold Swartzenegger), a character of “Heroic Fantasy” that could represent the first model in the series (in fact, I changed it to Aragorn, the Lord of the Ring.)

Aragorn, Lord of the Ring 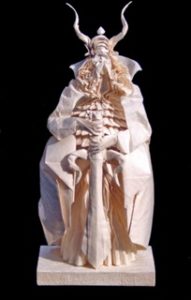 It would be difficult to produce such objects without using methyl-cellulose and wet-folding technique, nor the metal structure that maintained the object in the desired shape, especially during transports and exhibitions. Also, if these objects are relatively large compared to other origami models, many details are very small, and force me to work with certain modeling tools (for shaping the clay normally) or tweezers’ fence.
Conan the Barbarian. 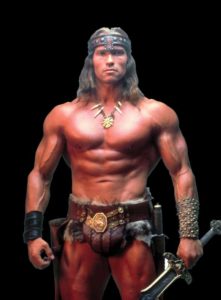 Another important difference: traditional origami is supposed to be a small popular distraction that almost general public can practice, and thus, assumed to be relatively simple, quick, reproduceable, written from first to last steps. Instead, this series of Barbarians is the culmination of many improvisation tests that I started experimenting especially in masks. The number of folds is very important here (several hundreds); deformations of layers of paper more or less random and often complex, and these models always include a large part of improvisation. So then I, and sometimes more than me, the paper itself directed the work. So my models are not reproducible. Even I am generally unable to produce a copy!

A third highly questionable aspect in these “Barbarians”: Is it necessary to reproduce every detail so realistic, all scales of the coat of mail, for example? That’s precisely one of the things that interests me the most: from a flat surface initially white, produce very different textures in a single model, and after all, give the illusion of different colors. This approach is quite normal in sculpture.

Work in 3D and with a large part of improvisation, which I have experimented in masks, as well as the “paper economy”; even if they are 3D, realistic and detailed, the height of the completed model is about 1/3 of the initial square, a usual ratio in many other origami models.

I am not the only one decider: the great number of layers can push me in a direction I don’t want, so that I can say both of us (the paper and myself) create the model. The paper is not the slave of my brain and fingers.

The use of the “box-pleating,” fixing my poor geometrical aptitudes; But this simple technical help to produce the textures experienced since my first models, in fact animals such as hedgehogs, snail, pangolin, turtle which already included “shapes” and other textures of paper playing with the light.”

“I return then to ‘normal box pleating. Compared to traditional techniques, that’s an easy win. But this is normal in my case: as compared to many other creators, I am not found of geometry. My aptitudes in this domain are very limited. But I don’t care. What really interests me is not geometrical conception, but a final result in 3D, as alive as possible. In addition, this technique can produce many different textures and details, as you could see in Barbarians series.
box-pleating a barbarian

Unlike classic characters like hobbits or dwarves, the concept of barbarians is that I do my best to define many different textures with the same paper. Also I reflect in terms of economy of energy and economy of paper. That means for example, horizontal pleats create 5 fingers and the shield. Vertical pleats create the helmet, face details and the sword. But all these pleats also need to cross in the middle of the initial square. Economy also means to re-use them to form the central shapes of the armor plating.

Below please enjoy a step-by-step explanation of the creation of one of my barbarians”: 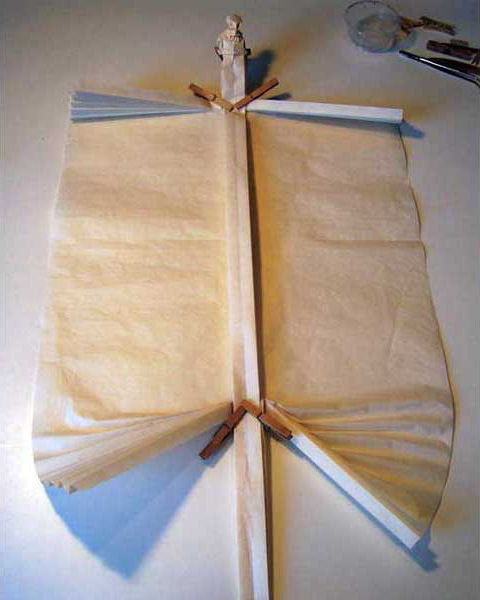 First day of making the Barbarian is to methyl cellulose the paper and create a box-pleating grid. The collapse begins; the helmet and the skull are done for the moment. 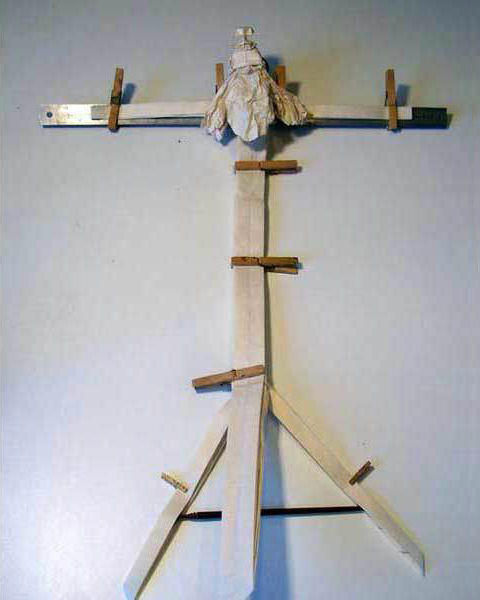 Second day: The collapse continues with face and hair details and up the second half of the cloak. Down, the legs start to form as well as the future axe. 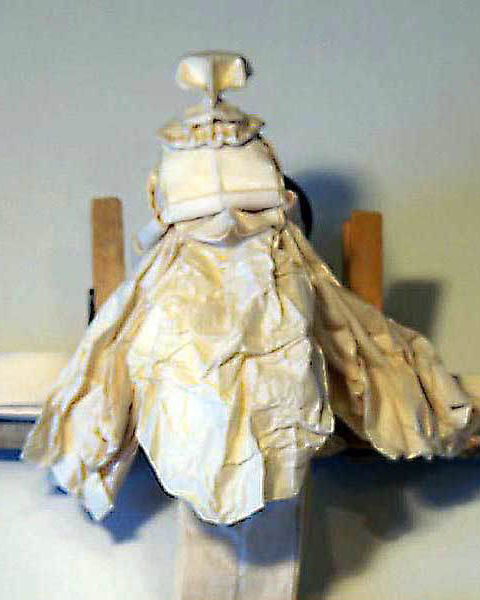 The head is shown enlarged. It’s just the beginning of the work as details will be finished at the end of the process along with more methyl cellulose and wet folding. 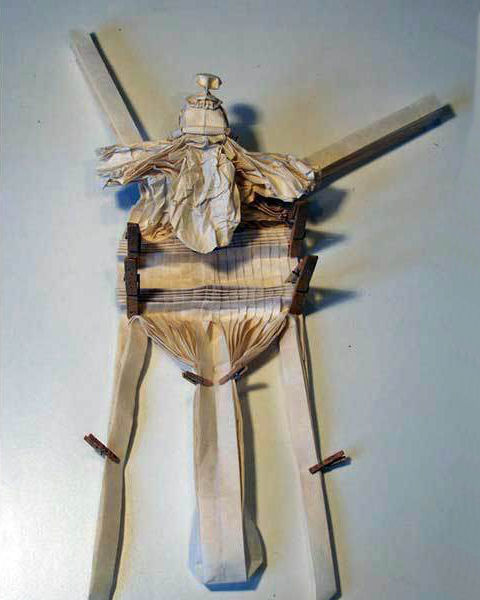 Third day: Collapse continues as the shapes of the armor are formed. 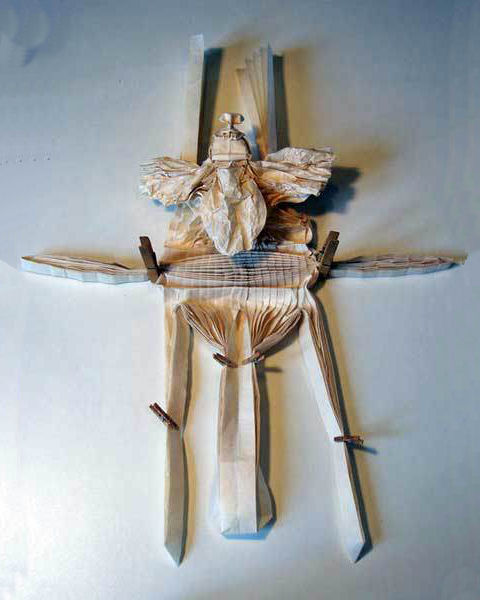 In progress: the arms continue to be formed. 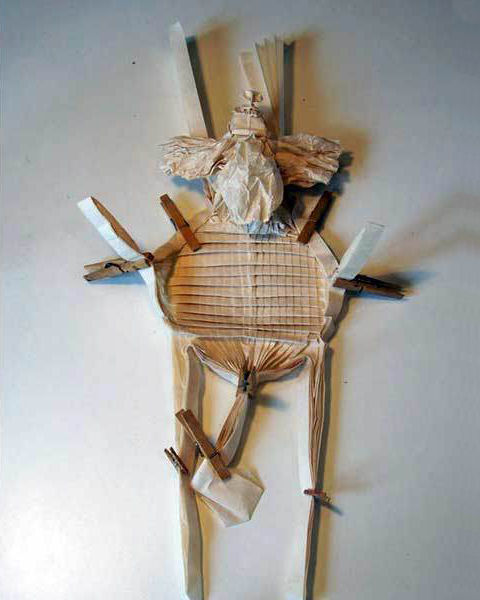 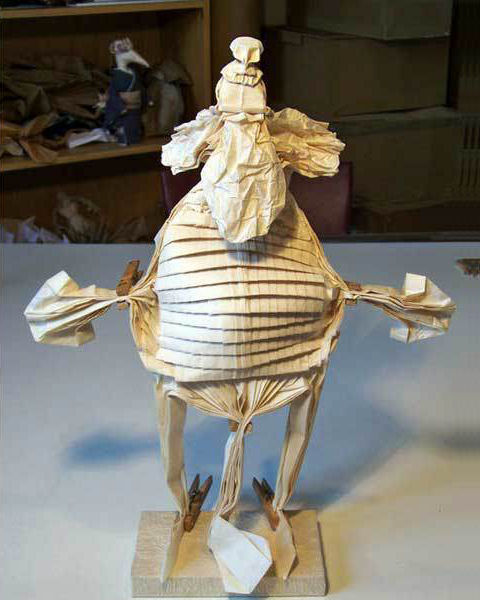 The model is fixed on the structure and the wood base. The final modeling can now begin. 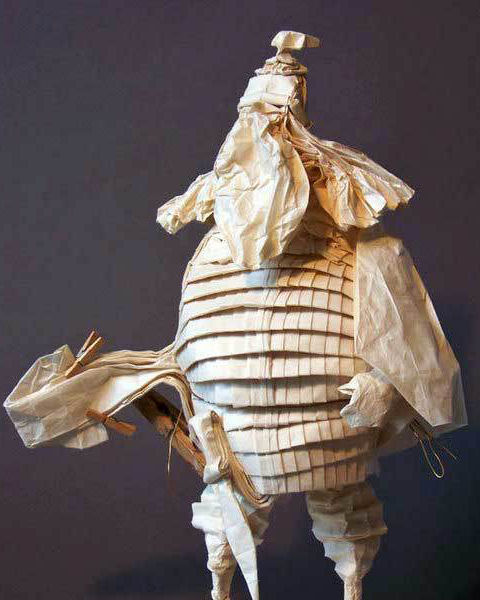 Fourth day: I am modeling, sculpting here with wet folding and a hair dryer. At this point, the axe doesn’t seem possible; I only see his knife and/or horn. 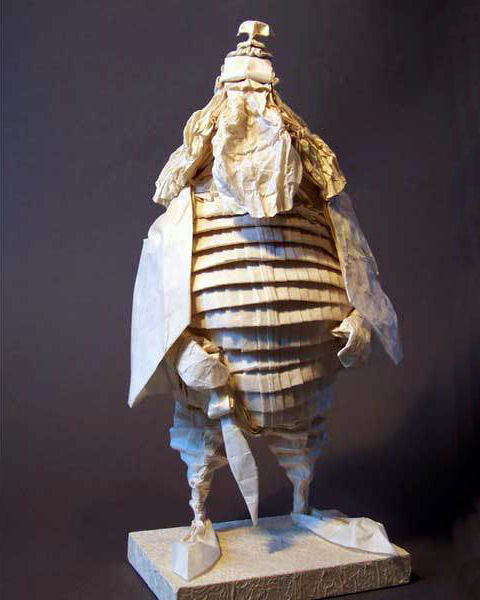 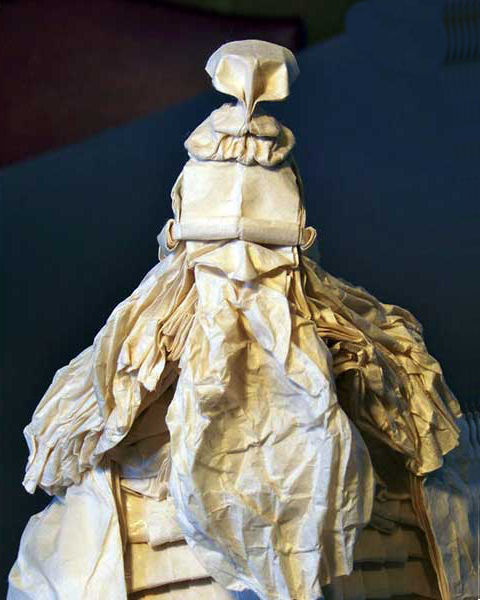 Face details and the skull on the helmet are being completed. I am relatively disappointed. This model is not one of my best, but merely acceptable. 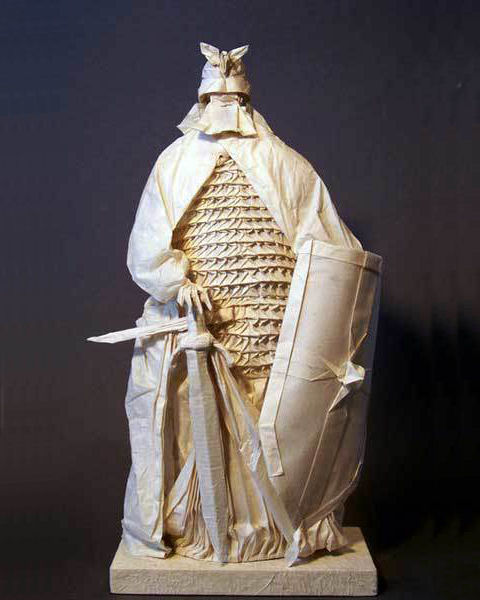 Nearly finished except the head. I will recreate another version of Crane’s Viking but will correct the proportions, changing the helmet and replacing the axe for a sword. 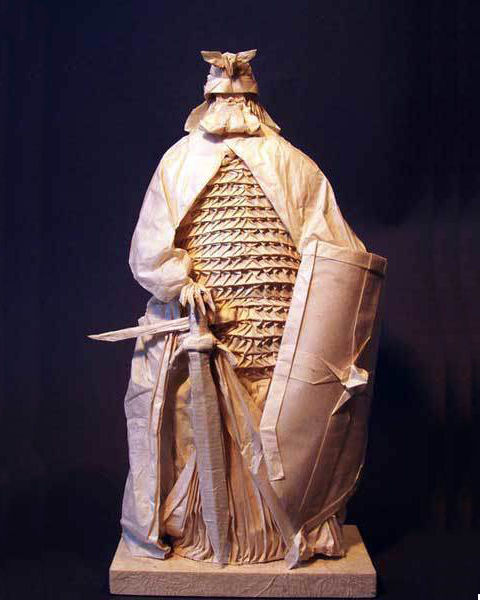 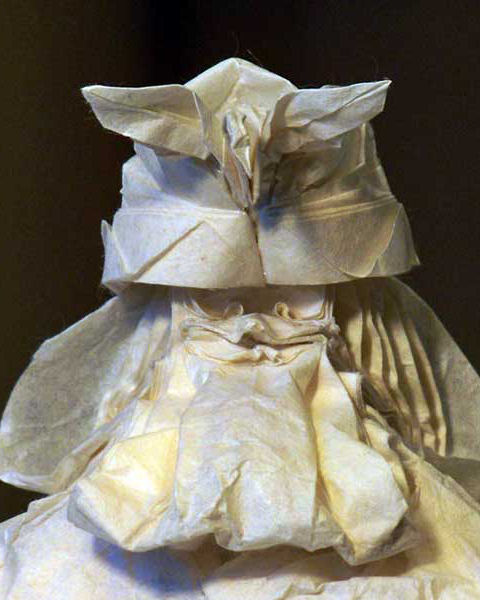 The head, helmet and crane enlarged. I will reflect tomorrow if I arrange some things or if I should stop here. Here are some details:

Korean paper bamboo/kôzô 90 grams
same as for all the other ‘Barbarians’.
Methyl cellulose and wet folding during the final modeling.
5 large days of work. 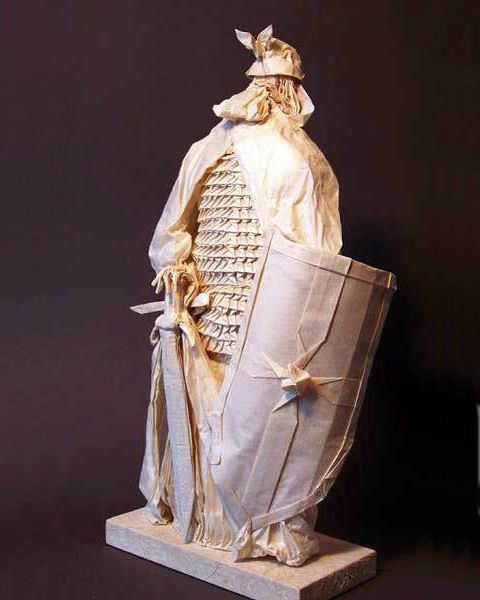 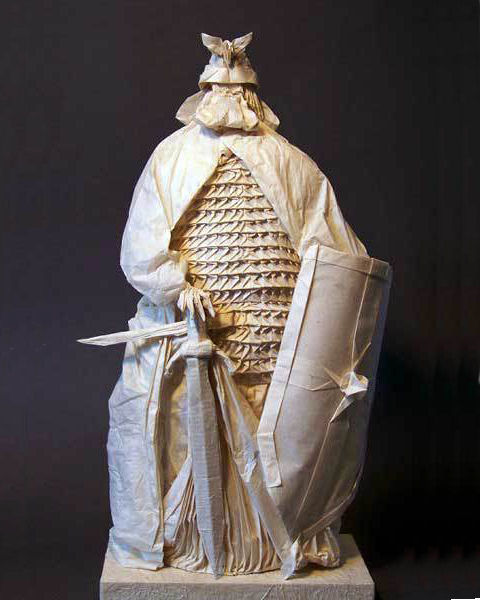 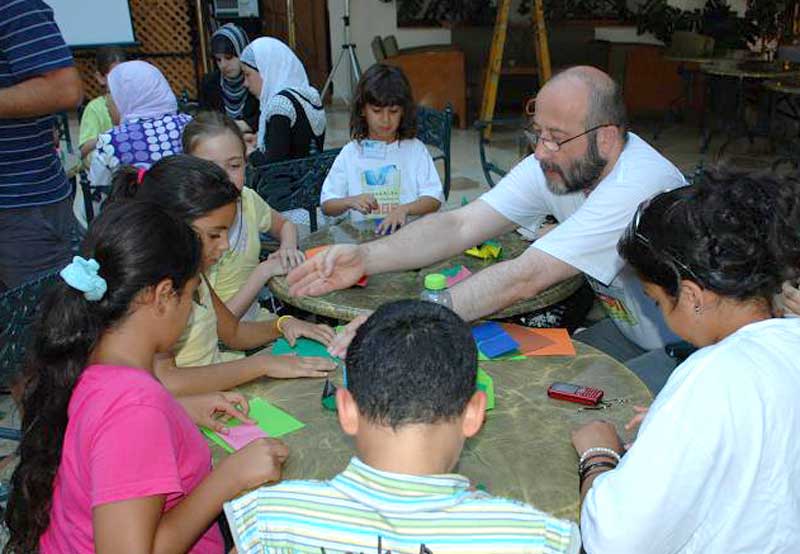 “As a person and as an origami artist, Eric was a stellar guest. His generosity, modesty, openness, constant good-humour and unbelievable origami figures brought a warmth and happiness to everyone who came. To watch his hands in a ‘ballet of folding’ when he creates with paper is an extraordinary experience. Such a person is all-too rare in origami and in the world, and should be treasured.” 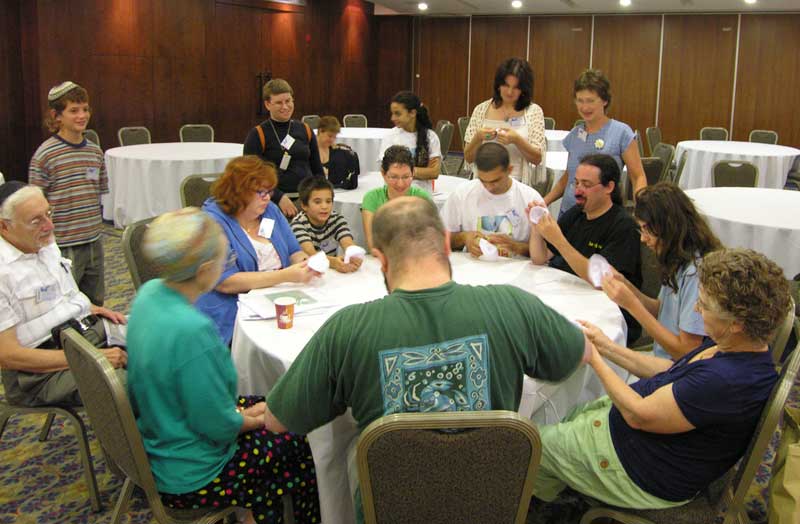